Energetics of "The matrix", the movie 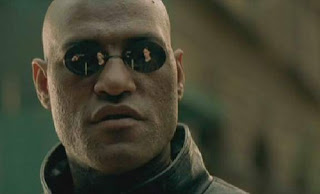 "The Matrix" (1999) is one of the best movies I have ever seen, a deepest thought about Power-to-Knowledge link. I like to think that most important thinker of this relation, French philosopher Michel Foucault, would have loved it.

This post is to analyse the movie from an energy point of view, let me explain that.

The screenplay tells about machines overtaking humankind and using people as batteries to produce energy, this because humankind shaded sunlight before being defeated, trying to cut energy source to machine. That is, no longer renewable energy for the world, just the finite energy present on earth.
One could expect that the only energy remaining is fossil fuel, but no mention in the movie about that. To be honest one renewable energy in such a condition is still possible, this is geothermal energy, and correctly the movie explains (without showing) that a small group of undefeated rebels is using it in their deep underground caves (Zion).

Machines are willing to use neither fossils nor geothermal, they decide to use the nervous system of men, which generates a series of electrical impulses going up and down through human body. This can technically be a sort of "unforeseen energy", but is more similar to fossils than to geothermal energy, it is non-renewable: dead people is liquefied and converted in feeding for humans still alive.

This can lead only to an outcome: energy from humans will peak and than decrease its rate, and finally machines will run out of energy. Please read this recent post if require further explanation about the concept of peaking for finite resources.

I've always dreamt of being capable to interfere with movies scenes, talking to characters, say suggesting to Janet Leigh: get out of that bathroom! a Psyco man is going to stab you! Same thing with Keanu Reeves and friends: stop fighting with machines! join the Zion community and just wait, machines will run out of energy, then you win!

If that was the final, "The matrix" would give us a powerful argument about renewable energy importance, and about myopia when using non renewable energy.
Posted by Roberto Mussi at 13:16

Roberto Mussi
Roberto Mussi was born in 1977 in Italy. He is Mechanical Engineer and has a Ph.D in Energetics. He studied and worked as a Research Fellow at Politecnico di Milano, Politecnico di Torino and University of Florence. He lives and works in Florence for Yanmar R&D Europe as group leader of the renewable energy sector.